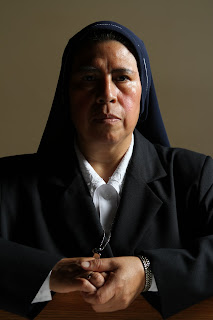 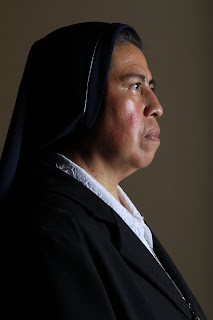 One of my assignments this month has been tracking down five of the six sister jubilarians celebrating between 25 and 60 years of service with their respective religious orders. I set out to take their portraits with one light in order to capture various moods and expressions.

The first sister I photographed was Missionary Sisters of the Sacred Heart, Sister Esther Ordonez. We met inside St. Lawrence Church, Lawrenceville. I’ve known Sister Esther for a number of years because of her devoted work within the Hispanic community. It was an emotional period for Sister Esther. Just a few weeks earlier her mother had died, and she was also preparing for a move to Paducah, Ky., after 18 years of working in the Archdiocese of Atlanta. The sadness comes across in some of the images. While the side and split lighting evokes emotion, it also hides some of her pain in the shadows. If Sister Esther found it difficult to pose for me, she never let it be known. She was very patient and cordial.

After I finished with Sister Esther I drove over to Divino Nino Jesus Mission, Duluth, to photograph Sister Martha Herrera, a Franciscan Sister of Our Lady of Refuge. Sister Martha was wearing a bright, white habit and she was in a cheerful mood. I tried to capture her jovial demeanor in the photos. 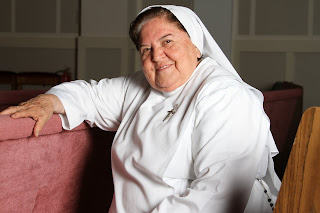 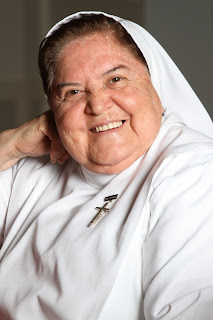 Nearly a week later I went to the residence of Sisters of St. Joseph (Concordia, Kansas), Sister Jodi Creten. It was pouring down raining when I arrived. I had to wait for the rain to subside a bit before I could bring the equipment out of the car. Sister Jodi lives in the community behind Most Blessed Sacrament Church called St. Joseph’s Place. Photographing Sister Jodi was like photographing an old friend. In the late 80s/early 90s our family volunteered at St. Thomas Manor in East Point. It was a small personal care home formerly operated by the Archdiocese of Atlanta. At the time Sister Jodi was the resident services coordinator. I took a couple of different shots in the living room of her small one bedroom apartment, but the shot of here sitting by her window with the strobe light over her right shoulder works the best. 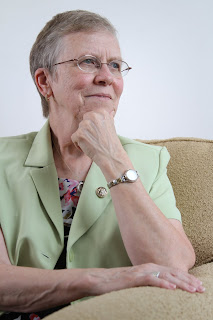 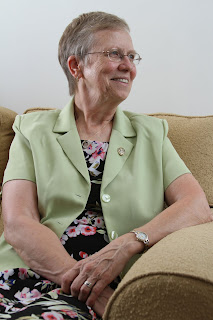 A day after I photographed Sister Jodi, I went to the apartment of Sister Angela Abood, a Sister of St. Joseph (Carondolet, St. Louis). She lives in a senior high rise building in Decatur. In fact, she likes to minister to residents there. Out of the three previously mentioned sisters, Sister Angela is the only Georgia native. She used to teach school and it was just my luck that her building had a library on the first floor. The librarian working at the time, a woman by the name of Dorothy Collins, allowed me to set up in there. The only request Sister Angel made for her photo was that I show the cross around her neck, a jubilee gift from one of the residents. I think Sister Angela enjoyed the photo session as much as I did. 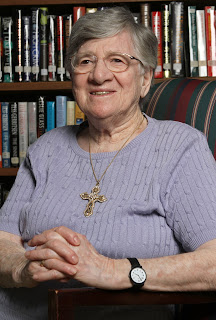 I have one more sister to photograph, Sister Susan Arcaro. She’s celebrating her 50th anniversary with the Congregation of Our Lady of the Retreat in The Cenacle.
You will be able to read the story of the other sisters in upcoming issues of the paper.You can read Stephen O’Kane’s story of Sister Esther, Sister Jodi and Sister Angela in the July 21 issue of The Georgia Bulletin.